When I first decided to clean out the engine bay, the first thing I took out was the air box. The air box, for those who are unfamiliar, is the plastic box where the air filter sits and delivers clean air through the Mass Air Flow (MFA) sensor and into the engine. Volvos at this time had an additional feature inside their air box in the form of a thermostat controlled flapper that covered a separate air intake hose called a pre-heater. This hose was attached to the exhaust manifold of the engine. When the air temperature was cold this thermostat would open up the flapper covering the pre-heater hose’s intake and allow air warmed by hot exhaust gasses into the system. This gave a boost in engine efficiency after cold start ups on chilly Swedish mornings.

I found that the thermostat on mine had become stuck at some point. Thankfully it had stuck in a way that kept the pre-heater intake closed. This was lucky as too much of this warmed air passing through the MAF is not good for it in the long term. I ordered a new and installed it. I also had to cut a new gasket for the flapper. The original was made of some sort of open cell foam rubber that had degraded considerably over the years. I cut my gasket (40mm diameter with a 20mm diameter hole in the middle) from a small sheet of 1/16th” thick neoprene I happened to have laying around my shop. This should last a lot longer than a foam one. 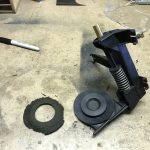 It is currently raining where (and when) I am writing this, so photos of the whole thing back into the bay will have to wait.

Interestingly there is a school of thought amongst 240 enthusiasts that sees the whole air box thermostat and pre-heater hose concept as unnecessary at best and potentially harmful at worst. Their solution is to remove the entire assembly, close off the pre-heater hose, and sometimes even ditch the intake snorkel so that the engine gets the maximum amount of air as is possible. A lot of these people seem to live places where it never really gets that cold so they do have a point there I guess, but it definitely does get quite cold in the winters where I live. I’m also aiming to restore this car to as near to its original state as I can manage, so for now I’m trusting in the wisdom of Volvo engineering and leaving the system in.