I got the air side of things cleaned and back together and I’m still presented with the same issue. The car will start and idle briefly before stalling. Intermittently pressing the accelerator will sustain the engine for a second or so but ultimately it will stall. Since I’ve ticked “Spark” and “Air” off the checklist all that remains is “Fuel.” I believe this will ultimately mean fixing/replacing one or both of the fuel pumps. The main pump isn’t a problem as it’s fairly accessible. The in-tank pump will be a whole other ordeal as you generally need a special tool to get the cover’s lock nut off. It’s also possible that the fuel pump relay has gone. That would be ideal as it’s cheap and easy to replace. My Bentley manual should have testing steps, so my next move is to start there.

I found a few minutes recently to reattach the throttle body. It was a pretty unceremonial act, and since I was pressed for time I didn’t get photos of it. Really the experience can be imagined by going back to the post where I took it off and looking at the photos is reverse order. The only difference you would notice is that I replaced the gross old gasket.

Tucked Away All Down There…

While working on the throttle I noticed the idle air controller valve (IAC) tucked down there. The IAC is a device that is in charge of maintaining an engine’s idle speed. It has a servo motor controlled valve inside that is opened and closed to varying degrees by the ECU using a pulse width modulated signal. This allows the airflow to bypass the throttle valve in order to maintain a steady idle. The action of the servo can become dirty and sticky over time, and since I had clear access to the IAC I figured I take it out and clean it. It sits inside a rubber collar that is attached to the engine with a couple of bolts. 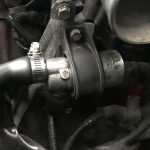 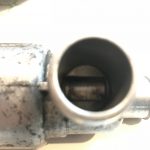 Getting a photo of the actual valve with my phone was not easy. You can sort of see it in the above photo. In truth it wasn’t very dirty, but it did have a thin coating of gummy residue on the outside. I blasted both ports with carb cleaner and ran a rag inside to clear that off. Then I moved the valve back and forth manually to make sure it could move smoothly. I could have rigged up a servo control circuit to actually test it out, but that seemed a bit more effort than I had time or patience to handle right now so I’m trusting that the servo itself still works.

A Series of Tubes

Since I had removed the main air duct to clean the throttle, I cleaned it off and looked it over to make sure there were no holes in it that might lead to excess air coming into the system after the MAF sensor. There were no big holes, but I did find a teeny, tiny hole in one of the bellow ridges. I doubt this was causing me the problems I am experiencing, but I put a little dab of rubber cement on it and covered it with a small piece of electrical tape just to plug it up. 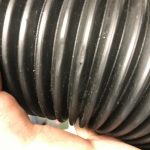 I began to reassemble all the air hoses between the throttle, the IAC, and the engine but got called away half way through the process. Total reassembly and the next attempt to start the engine will have to wait for the weekend.

I kept this post in my pocket for a few days. After cleaning the throttle body I had hopes that I’d also have reinstalled before publishing it, but the weather around my parts has been brutally hot and unpleasant so that hasn’t happened yet. I did find my way to my local NAPA store where I bought some throttle body cleaner and a few other needed solvents. These included specialized throttle body and air intake cleaner, brake cleaner, and some belt conditioner. The last item was because I’ve found that when I start the engine and give it a little gas one (or more) of the belts is letting out a hellacious squeal. I figured a little belt conditioning couldn’t hurt and might fix that issue. I consulted with a friend of mine and he suggested that the squeal might actually be due to failing alternator or water pump bearings, but I’m hoping this doesn’t turn out to be the case as I’d rather not have to replace either of those things at the moment.

When I got home I took the throttle and removed the two the vacuum line fittings in the top. I put the all the bits into a disposable aluminum pan and gave them a thorough spray and soak in the cleaner which, as my son found out, is some pretty noxious stuff. But for all its smelliness it’s also terribly effective. The caked-on grime withered away beneath the spray and soon the pan had a little pool of very dirty chemical runoff. The gunk was especially thick around where the valve met the housing and seemed to make the action sticky and lethargic. I made sure to also whack a rag around the inside of the air channel and into the little nooks and crannies all over the piece. The valve now definitely opens and closes more readily than it did before.

Thanks again to Son 1 for helping me out with cleaning and reassembly. 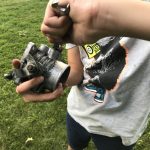 Here’s the before and after. 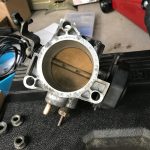 Having tested the spark in our previous episode and found it satisfactory, I decided to move on to removing the throttle body. The throttle body, for those who don’t know, is the mechanism that controls the amount of air going into the intake manifold in response to how far down the driver is pushing the accelerator pedal. The airflow is controlled by a butterfly and the position of that valve is read by a throttle position sensor attached to the side. This information is sent to the ECU as part of the equation used to figure out the air/fuel mixture to be injected into the engine.

Throttle bodies get dirty, and a dirty throttle body can stick and otherwise not function well. The dirt introduces turbulence into the air stream which can mess up idle and diminish fuel economy. Neither of those things are good, so I decided to take mine off and give it a good cleaning.

Removal was a relatively simple affair, in principle at least. It’s held to the intake manifold with just three bolts. The outer top bolt can be easily removed with a socket wrench. The other two required me to borrow a set of crescent wrenches from a neighbor because the space available to access them was minimal to say the least. Once I had the wrenches I was able to remove the last bolts and take the assembly off. 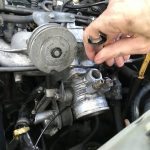 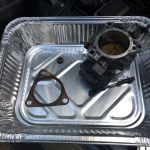 As you can see in the middle photo, the inside of my throttle body was quite dirty. Unfortunately I did not have any throttle body cleaner on hand, nor did I yet have the replacement gasket. The existing one was also quite dirty and definitely needed to be replaced. That should arrive in a day or so.

I wanted to check for spark, but rather than do the more laborious plug-against-the-block check of the spark plugs I borrowed an in-line tester from a friend of mine. This handy tool lets you attach to one end into the installed spark plug and the other to the distributor. A light in the middle lights up when the circuit is completed. Here is a short video showing it in operation. Shout out to my son for starting the car for me while I held the camera.

It’s not easy to see on video, but the light is flashing. So I have spark on all four plugs. I also replaced the distributor cap and rotor. The old ones looked a tad corroded, and since those two parts are inexpensive I figured they might as well be changed along with the plugs.

The motor is still stalling out, so down the checklist I go.

I need a plan.

As an amateur I’m mostly winging it here. I’ve taken a dirty, busted looking car that sort of ran and turned it into a cleaner, less busted looking car that doesn’t really run. Not impressive. I’m starting to think that this hasn’t been working as well as I hoped. Therefore I think I need a plan of action to get my motor running again.

Every engine needs three things in order to start and run:

The most basic way to test for spark is to simply remove the plug to be tested, reattach it to its boot, and hold the shell or threaded part against a grounded part of the engine. Crank the engine, and if a spark jumps the gap then all is well. If you don’t get spark it could mean one of several things.

There are other possible causes of bad spark but those are a bit beyond the scope of what I’m working on.

Air is fed into the engine through the large air intake hose that starts at the front of the car near the grille and passes through a filter, the Mass AirFlow (MAF) sensor, the throttle body, and into the intake manifold. Balancing the air and fuel mixture can be a pretty delicate thing. A leak or other unexpected mechanical failure along this path can result in too much air coming into the engine. A dirty filter might bring in too little. Some typical points of potential failure in the air intake system are:

Some cleaning and testing are definitely in order. I’ve heard that spraying the air intakes with starter fluid and listening to see if the RPMs jump up for a moment, the idea that this fluid is being sucked into the airway and providing a brief boost to the engine, is one way to see if there are leaks. Another is to use a smoke source or fogger to attempt to spot unexpected air currents around the air hoses.

On my car, fuel is delivered from the tank to the engine via a pump, sent at pressure through a hose, and into the fuel rail where it is injected into the cylinder for combustion. The amount of fuel sprayed and its timing is controlled by the Engine Control Unit, a computer that takes in all the data from various sensors and figures out the correct fuel/air mixture. My particular ECU is a Jetronic LH 2.4 made by Bosch (part # 0 280 000-561) in Spain. Thankfully mine is a “white label” version. Some -561 ECUs came with a pink colored label and are said to be “problematic”, so it’s nice to not have to deal with that at least.

It’s a pretty long list, but I’ve already ticked a couple of boxes so far, and crossing them all off the list will put me in a decent place to truly understand how all this stuff works together.