I decided it was time to start putting things back in rather than take them out. While the engine block was still beyond the normal human bounds of filthy, I did not think it prudent to try and power wash it as I’m not 100% sure where all the more sensitive sensors and other bits are on the engine and didn’t want to inadvertently break something important (and expensive) for the sake of the aesthetics of a part of the car that’s hard to see even when the trunk is open. So first back in was the air intake system. Before putting it all back together I decided to clean the MAF. A few good sprays of MAF cleaner and some brownish gunk flowed out. It obviously needed it, and I’m hoping this will help a bit with a bit of hesitation at idle I’d noticed. 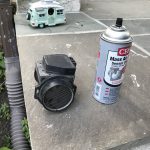 After also cleaning out the air ducts, which were also pretty filthy inside, I put everything back together with shiny new duct clamps. It was something of a wrestling match to get it all back into position, but I eventually got there. 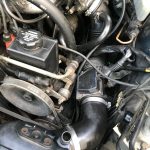 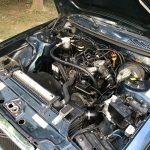 Next was the pre-heater hose, which is at the bottom of the engine and can’t really be seen here, followed by the radiator and its hoses. I have a few more radiator related bits to square away at which point I can reinstall the battery, cross my fingers, and hope the engine still starts.