This time the arrival of parts was a bit unexpected. I knew they were coming, but because of the 20th century-based vagueness of the USPS’s tracking capabilities I didn’t know they’d come today. So it was a fun surprise. 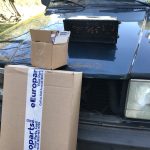 What Did I Get?

Most of the parts were small – clips and such – and the big box had the door pockets I had ordered. Those will have to wait til the weekend for installation. In the meantime I put the other things were they belonged. Namely as replacement for the numerous lost or broken clips that came with the car. 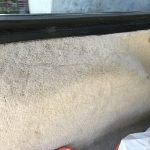 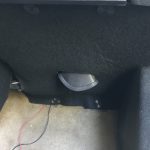 The first photo is the driver’s side of the cargo area and the two clips shown keep the cover on over the spire tire. The second photo is the passenger seat’s foot space under the glove box. Note two of the mystery wires that run the length of the car. I have no idea what they are connected to, but give the apparent condition of the wiring that runs through the tailgate hinges to things like the defroster and wiper I can only guess that they’re jury-rigging something important. Obviously, we will find out in due time. 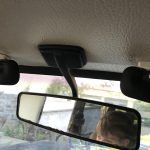 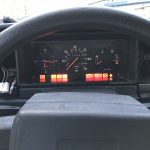 My son helped me replace the retaining clips for the sun shades, and I took the opportunity to reconnect the instrument cluster. All seemed good there although I should really drive around the block a few times to make sure things truly work.

The trip reset button had broken at some point, so instead of paying nearly $40 for a NOS replacement I decided to repair mine. The clip has a long, thing, somewhat flexible rod onto which snaps the button part you press in to reset the trip counter under the odometer. That broke off and refused to be securely glued back together, so instead I drilled a small hole in the clip part slightly smaller than the diameter of the rod itself, wedged the rod in there, and then cemented it with plastic weld. 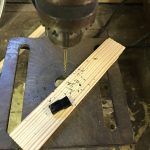 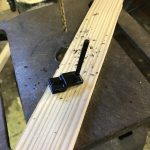 Worked like a charm, and farm preferable to spending money.