Friday brought my a variety of new parts, both of which are essentially motors of one kind or another. 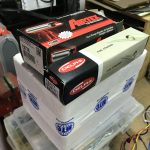 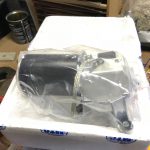 I started with the windshield wiper motor as it was the most straight forward of the two tasks. My older son helped with bolting it down in the engine compartment, and I did the neck bending contortions required to attach the motor to the wipe mechanism itself. 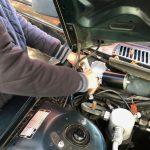 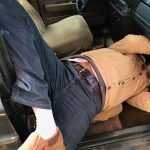 For those wondering what a proper wiper sounds like after seeing my previous noisy/broken motor videos, here you go. It’s a much more pleasant sound.

After we bolted everything together the wipers functioned but sluggishly and often wouldn’t quite return to zero. Acting on a tip I had seen on YouTube I wiped the windshield down with rubbing alcohol. This helped greatly and I am now satisfied that the wipers are working as intended.

Next up was the task of removing the transfer pump from inside the fuel tank. I removed the floor from the cargo area. This consisted of removing a row of screws from one side and the two screws that attached hinges of the hatch that covers the little space where the jack and other tools are usually stored. When that was out of the way the access port to the sender unit was exposed which was another addition set of screws. When that was out of the way I finally got a look at the top of the sender itself. 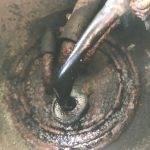 As you can see, it was pretty corroded, but not as bad as I’ve seen in other photos. First I removed the old, rusty fittings keeping the hoses on the feed and return lines. Those would get replaced. Next, after dousing it in Aerokroil to break up some of that corrosion, I used a chisel and hammer to knock the lock ring loose and removed the pump assembly itself.

Note to other beginner mechanics: when you work on anything fuel related expect to smell like gasoline for the rest of the day. 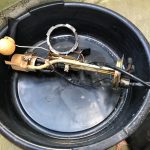 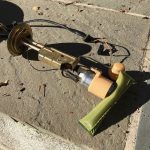 Disassembly and reassembly is pretty straight forward. The caveats I offer are:

Back into the tank it went, and back to the driver’s seat I went to perform a cold start. I was really hoping it would start up and purr like a kitten for me, but unfortunately the new transfer pump was not the panacea I was looking for. As you can kind of tell in this video, the engine will do a few cycles of shaking and near stalling (sometimes actually stalling) before it smooths out a bit and runs well. I’m quickly running out of components that can be replaced in the fuel system that might cause this. But at least I know the transfer pump is good and the engine does run.