So far every session with this car has brought revelations of more broken things. For example, I received the new hinge for the glove box in the mail yesterday. After picking the broken bits of the previous hinge out of the box’s door I was able to install the new one easily. However the hinge kept banging into something when closing. I got nervous that this seemingly simple fix was going to be more complicated that I anticipated. The glovebox is a single unit, so I removed a few screws and slide it out of the dashboard to check what was going on. Thankfully it was just some easily repositioned component causing the obstruction, but now that I had the box out and could see it from a different angle I noticed that the not only was the latch striker not original to the car but was also attached with two random wood screws that had been screwed into the plastic housing of the glovebox. Obviously not acceptable, so now I have to find a replacement. I think a pick-and-pull yard might be the best bet for something like that. For now the box will have to hang open. 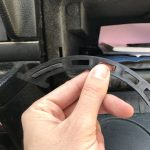 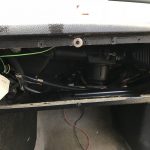 The gate opens and closes but doesn’t catch, nor does the exterior latch actually actuate the mechanism. I removed the entire assembly, latch, handle, and all, and everything seemed to be in order, but I couldn’t figure out how the exterior latch was linked to the mechanism itself. I looked at the diagrams in my manual and they seemed to suggest there was some part missing, but what that part was wasn’t evident. And to top it off I noticed that the trim piece where the interior handle is was broken. Boo.

Incidentally, I’m sending a special shout-out to Kano for Aerokroil Penetrating Oil. If you have two pieces of metal that are rusted together Kroil will sort you out. It’s almost like magic. 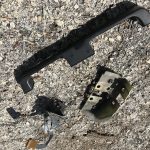 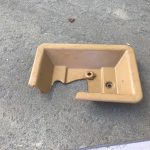 As the old saying goes “the third issue with your decades old Volvo’ a charm.” In my workshop, deep in the bowels of my house (aka the basement), I removed the odometer from the cluster and the drive from the odometer. Sure enough the 25 tooth gear inside was missing a tooth, so I ordered a replacement plus a new set of lightbulbs for good measure. 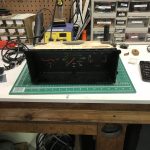 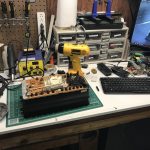 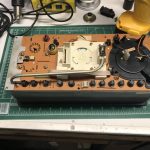 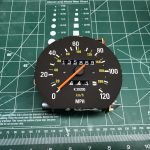 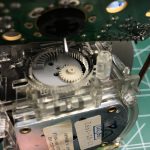 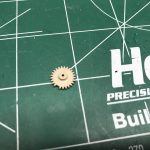 Once those parts arrive and I get them into the cluster and the cluster back into the dashboard I’ll call that one done.