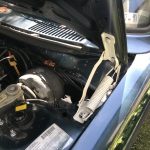 “Hi, I’m New Hoodhinge. You may recognize me from such places as ‘eBay’ and ‘Some other white Volvo 240′”

Yes I got a new hinge to replace the broken one. I acted quickly on getting that because I didn’t relish the idea of my hood accidentally collapsing on me.

One part that I had been missing for awhile was part 1246561, the tailgate lock pin that coupled the outer handle latch to the inner one. Unfortunately they no longer make them. I had spent a long time looking high and low for this difficult to find part. I even used a common hardware store lock pin at one point. Thankfully a recent eBay search recently turned up a guy selling off his remaining stock of random 240 parts. As luck would have it this included the lock pin. I quickly bought it for $5, received it in the mail, and got it installed. However every once in awhile I would hear a clatter in the tailgate when I opened or closed it. Previously I had chalked those noises up to the unattached connecting rod rattling around, but all those parts were now tightly in place. What could be the issue? After hearing it one more time I reached into the innards of the door’s frame and rooted around in the dirt and gobs of butyl putty and came out with… a tailgate lock pin. 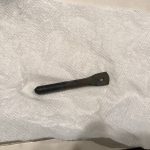 It had been in there all this time and had been intermittently stuck in said putty. I have to admit that I felt kind of silly, but in my defense it’s not too strange to think after all those openings and closing the pin would have fallen out or at least been visible awhile ago. So now I have two pins. I guess I’ll resell the old one on eBay and call it even.