I usually only have time to work on the car on the weekends. This past weekend was quite busy which, sadly, meant no work got done. I have on hand a few parts that I’ve been itching to get them installed, so after I got home today I took a few minutes to see what I could get done. First, and easiest, was to put the dash back together. That was just a matter of four screws and some snap-in panels. 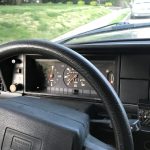 Tada! I noticed that the headlight/parking light control knob had a weird yellowish tint to it, and I tried to clean it as best as I can but it’s still got that weird color. It looks pretty grody so it’ll get replaced at some point.

I also started working on the rear seat latch. The original was broken when I got the car and got even more broken when I messed with it trying to put the seat down. So I removed the old one, mostly to get a look at the wires that connect to the seat locks. Even after prying it off I still couldn’t get the wires to move, so something must be stuck somewhere. That will require further probing when I have time. 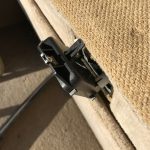 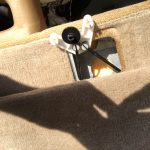 Of course, the frame around the latch broke the moment I tried to pry it off. You can see bits of it in the top part of this photo showing the old latch next to the new. 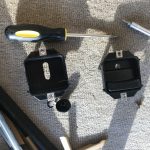