After getting the broken latch handle off the rear seat the other day I was stuck (no pun intended) on actual getting the latches to disengage. No matter how hard I yanked on the bit of wire that was poking out nothing would happen. Not wanting to break anything, I backed off and took a little time to think. Last night while sitting on my porch enjoying the (long overdue) nice weather I tried to picture how the latches worked. It was obvious that the wire was attached to the latches and that they ran inside the seat, so I thought that perhaps if I pulled on those wires a little closer to the latch I’d get better leverage on them. From the back seat I lowered the center arm rest there and worked my arms through the slits in the seat fabric inside and was just able to grab onto either wire near to where it connected to the lock. A bit of semi-gentle tugging and voilà – the latches spring and the seat folded down. That allowed me to get some of that magic Aerokroil into the latches to free things up and almost immediately I could lock and unlock the seat just by pulling up on the wires from where they meet by the latch handle hole. Now to reinstall that part and I’ll call that done. 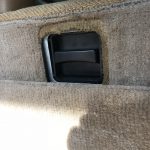 And the seat forward to prove it 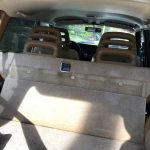