Even though it now boasted a shiny new grille, my one-eyed, wiper-less car was starting to get side eyes from the neighbors. The time to fix the missing headlight was nigh. The new American light was in my basement shop ready for refurbishment. Primarily the lens needed sealing and cementing with silicone. I washed the greasy dirt that had accumulated in on the surface and scraped the old sealer from around the edges. This was in preparation for a bead of Lexel clear silicone in the groove where the lens would sit. In the meantime the 9004 socket had arrived in the mail so I was now ready to fix the car side of the equation. 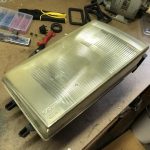 Unfortunately the weather was not cooperating. Over the past week it had already been raining steadily, but thankfully on Saturday morning there was a short pause. I took that opportunity to attach the 9004 socket to the wires that used to connect to the old H4 socket I had removed. I had previously considered soldering the wires together, but given that these wires would be next to a running engine in a bouncing car this probably would not have been durable enough. Instead I decided to use water-proof butt splice connectors attached using a crimping tool. That would, as the name suggests, make the join water proof and provide an amount of physical strength. The biggest problem I had was that I wasn’t sure which wire was for the high beams and which for the low. Looking at the existing left-hand light was no help as its 9004 socket was very hastily assembled from a H4 socket like the one I had taken out from the other side and some spade terminals. The whole deal was then bound together with some purple electrical tape. I sighed, removed it, and mentally filed another entry on the to-do list. Anyway, given how the rain was slowly starting back up, I decided quickly that the red wire was the high beam and spliced it all up. I cut out the spade terminals on the 9004 connector for the other light and spliced them in the same way. The result? The headlights worked, but since it was still sort of light out I wasn’t sure if the high beam setting was really producing more light. I’d have to wait until dark to see. 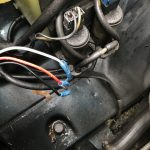 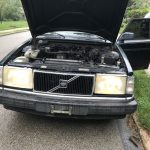 I also put the reconditioned windshield wiper arms back on too. 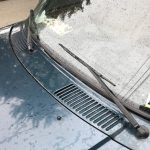 Next my oldest son and I decided to take the other light out so we could clean it up. It was then that I noticed the connector for the blinker and running lights was half way missing. The “sleeve” side that made contact with the pins from the light was missing its housing and had just sort of been stuck on and taped up along with the headlight wires. Also the grounding wire was just sort of wedged under the battery. Was it actually grounding anything? I have no idea, but it came out with the light assembly. I’ll have to order a new connector and, in the meantime, clean up this light as I had done with the other. 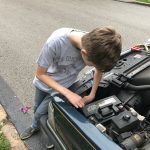 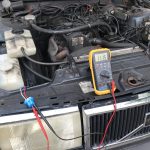 I also tested the lights the proper way by using a multimeter to measure the voltage Sure enough I had the wires backwards. I undid the crimps, pulled the splices off and redid them properly.

Next up: get the other light back in and make sure the blinkers all work as expected.